Multi language websites experience technical issues on a common basis on custom builds. Mostly, it is not always the fault of the webmaster but at the same time, the problem must be resolved.

So, here are some common issues related to Hreflang and technical multilingual SEO. 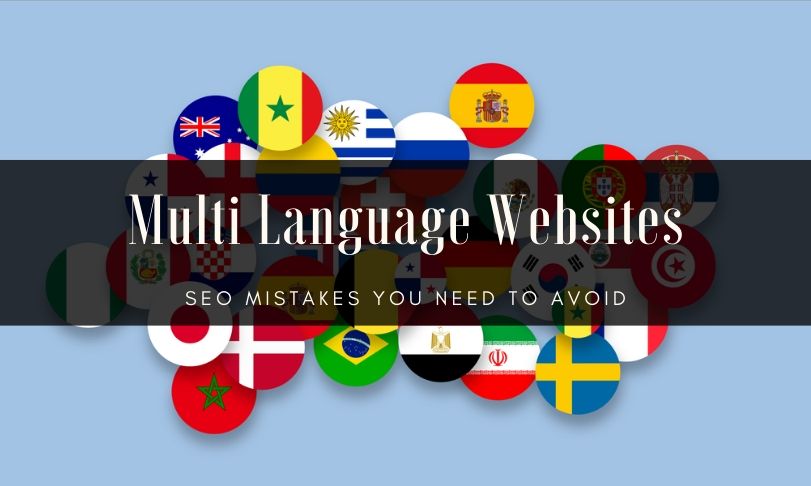 1. Incorrect Implementation of the rel=alternate and hreflang Attribute:

According to a study, approximately 75% of hreflang implementation has issues in them. It is a major concern as it prevents you from gaining higher ranks. Also, it makes website content less appealing to Google.

There are many websites that don’t contain this attribute. Despite the website being designed in multiple languages, it does not contain an hreflang attribute.

As per Google, websites in Multilanguage must contain a self-referencing rel=alternate hreflang attribute. Sometimes, such websites even contain version which is static and implemented in the head template of the website. Hence, this misleads Google.

The correct implementation is including a self-referencing URL in all versions. This will make sure that your site ranks well in all locations as well as all languages.

If the hreflang attributes are absent in header Google basically analyzes the complete page to identify things before it realizes the solution was exactly there. Hence, it must be included in the closing and opening tags for heading.

A hreflang attribute specifies the French description of a site. It is just like the link tag which inserts CSS or JavaScript files. Also, a sitemap can be used or a header in HTTP for the files that are not HTML.

Often, Google misinterprets relative URLs. Hence, you need to be absolute about it. If your page is a relative URL or 404, it can pose issues in the complete indexing of its language version.

If a non-dynamic tag is implemented within the header template of the site, all pages must possess similar HREFlang. It is not a good thing!

In some situations, it is better to not include hreflang trait at all rather than placing it in an incorrect manner. Just remember, it must include a self-referencing hreflang tag directing to itself.

It is suggested by Google to use an additional tag after the other languages. This will easily differentiate the selection page for the language. If the homepage showcases a list comprising various languages to select from, it would be the default version of a language.

It is important that the page set up must be done correctly so that it redirects users easily during their second visit. Though the website has other attributes for language, which includes self-referencing one as well, it still, misses the default tag that specifies language selection on a general basis.

Also, the homepage is missing. Rather, it must incorporate them along with a self-referencing default tag. If you use 301 location-based users IP, it will mention the default version within the HTTP header.

It is a huge problem, particularly if the Homepage is a vital page for the website. It is a common error because the way developers implement hreflang metatags, usually as an outcome of the plugin.

Mostly the plugin experience this problem. If the blog post or page is not translated, the plugin exactly knows what must be added to the hreflang link attribute to the homepage. This can be interpreted as a relative URL for the homepage.

A large number of people do not understand what exactly canonical tags do. They only possess a rough idea about the same.

This canonical tag must always be self-referencing. This means page A must direct to itself and nothing else. With a canonical tag that self-refers, you can also remove risks associated to duplicate content.

For Multilanguage sites, a canonical tag must be self-referencing to the page it is mentioned on, until otherwise specified. If the canonical tag is combined with a Hreflang attribute, you are fooling Google.

Avoid using rel=alternate hreflang for solving duplicate content issues, because it’s not its purpose. It only tells Google to display the version of a page for a distinct location and language in the browser.

3. Issues Related to IP and Geographical Based Redirect:

Geo-redirect is not something to worry about. Also, users searching from a specific location will love content that is displayed in their preferred language.

Though you can send users from Spain to the Spanish version of your website, it does not guarantee that every person in Spain uses Spanish IP or holds a browser in Spanish. There are lots of users who use English language browsers. This implies they are constantly forwarded, no wonder what they perform. Moreover, VPNs are becoming popular every day. Hence, this is not a 100% solution.

By establishing geo-redirection, it will not support you in ranking better in varying languages. The finest method to direct users to correct form is using HREFlang to correctly display desired pages in search engines. Sure, if users are using a distinct IP in VPNs, search engines will display incorrect version, but a user using the VPN must know about the same.

If a user accesses the website of a business directly it is accessing by using the URL of the country or by homepage. If there is a language selector mentioned clearly in place, it will make easier for the user to search the correct version.

Moreover, if your site offers automatic redirection, make sure that you use default hreflang. It will let Google know the page for language selection and display the same when a user is not sure about its preferred or location language.

4. Using No-Index and Robots.Text Tag on the Translated Pages:

Another major issue while converting pages is avoiding considering no-index or not resolving the issue. But if the same is left on purpose, then it can lead to problems.

Though you can use a language selector for showcasing a similar version of the language in all regions, it is useful to consider different versions.

It will let you have varying sliders, offers or products in varying regions. If there are numerous English versions, which use no-index tag is not a good idea. If the reference version incorporates HREFlang and utilize no-index on the same, you are informing Google about the same indirectly.

A common error that most web-marketers make is having a static language implementation flag or button. Users are interested to know what they are searching for. If you are on the subpage of the website, altering the language will not take the user to the homepage of a specific language. Not always! It will preferably take them to particular pages in the desired language.

Here, you can check the three solutions:

If you have a big website or blog with thousands of articles and pages, the users will find it difficult to article they are looking for. It is therefore good to go for language selection implementation, which sends you to the homepage that can be viewed.

6. Using URLs in English for Other Languages:

One question that may come into your mind is to why not convert all the foreign URLs?

We all are aware that using a keyword within the URL is useful to marketers to rank better. But the content is not dynamic on stable URL structure as the parent of URL changes. So, if you wish to translate the site, make sure the URLs are converted as well.

This is important particularly for e-Commerce website builders and SEO optimization tools.

Google is almost everywhere, but there are still some countries where it might not be ruling. For Example, Russia uses Yandex and China uses Baidu. Moreover, different countries use varying search engines in distinct proportions.

Even, Google is banned in a few countries. So before you convert the content pages for such regions, make sure you gain knowledge about Google’s popularity in respective countries.

In addition to this, consider other engines too, which may not possess similar algorithms like Google. For example, Yandex is a search engine that does not implement links in its algorithm.

8. Focus All Your Links on the Core Website or Version:

It is a major aspect of consideration that leaves international competitors behind locals. Google likes regional or local links. Hence, if you want a website conversion in German, you better off have links from the top-level domains than creating links from top-level domains.

This is known by local competitors and it is by far simpler for them to obtain such links than the competitors internationally. They don’t have to depend much on building links as they can attend meetings and network, promote their sites, and meet new people.

Moreover, an international website rarely focuses on its translated versions. But since a lot of time is spent on translating it, you must focus on promoting the same. Create a few regional backlinks and ensure they are developed in the right form.

9. Content and Display Issues in Multilanguage Websites that Impact UX:

User experience problems because they lack knowledge about the same. However, problems with content are not merely because of unawareness.

There are some important aspects that you must take into consideration:

One thing true is that translations done using Google Software are not always correct. A large number of people utilize this method to avail content in English into different languages as search engines are not good at identifying content, which is translated automatically. This might be because Google is not much efficient in understanding other languages than English, however, users can easily understand it.

It is best to go for human translations ensuring that they know both languages well.

Don’t expect to gain results as soon as you translate keywords. It is a good beginning, but you may also require contacting someone, which knows the optimization of search engine and native language to precisely determine and integrate correct phrases in the content.

In order to create a strong impact, it is best to gain some knowledge about the culture and preferences of that location. You can take assistance from a translator, but it is wise you contact someone from the region or someone who actually lived in the place.

A large number of people use Google Recaptcha. Only a few of them actually translate it. As a result, incorrect solutions are obtained. This can be a big problem particularly for those who don’t speak English.

The best way to deal with this problem is by displaying the message, I am not a robot.

The best way to rank your Multilanguage website is by using a region as well as language code. Create different versions as if all versions are the same it is a waste of time as well as HDD space. It is good to target some markets, but not all of them.

So, follow the above-mentioned tips and make sure you avoid practicing the mistakes, which you might be making for so long.